When my parents were married on June 15, 1946 my father was just returning from service in WWII.  Their courtship had been unique in that they had not known each other but were brought together by my paternal grandfather.  My father had been born and raised in Detroit, Michigan and my mother had been born and raised in St. Joseph, Michigan, some 200 miles away.  The families knew each other, though, through another familial connection but my parents had never met.  While my father's parents, and even his brother and sister, had traveled numerous times to St. Joseph to visit my mother's family, my father had never joined his family on these trips.

When my father went into the service he was already engaged to someone from Detroit.  She was wearing his engagement ring and my father had presented her with a photo of himself in uniform with a personal inscription.  During his service in Central America in the US Army Air Corps, his fiancee, Lillian, had "strayed" and my grandmother had been privileged to catch her in this indiscretion.  My grandmother, being a very controlling person, had demanded the engagement ring and photo back and Lillian was banished - never to be heard from again!

It was at this time that my father's parents traveled to St. Joseph to visit my mother and her family.  During this visit, my paternal grandfather played matchmaker and asked my mother if she would like to write to his son in the service who had just broken up with his girlfriend.  My mother agreed to write to the serviceman only if he were to write her first.  The correspondence began and would last for about 2 years until my father was discharged in February, 1946.  During this time my father decided that it would be a great idea to send his "new" girlfriend a photo of himself in uniform and this is the photo he sent her.  Evidently he had been raised to "waste not, want not" though my brother and I thought this was the most hilarious thing as we were growing up and would hear this story and see this photo: 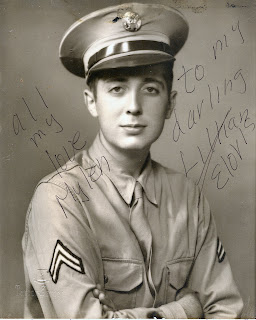 In February, 1946 my father was discharged from the service and he returned to Detroit.  My mother and HER mother (chaperone, you know!) traveled to the train depot in Detroit to greet him.  This would be the first time my parents actually saw each other.  Immediately my father proposed, my mother accepted and she was given the same engagement ring that my father's previous fiancee had worn.  They were married just a few months later on June 15, 1946.  On their 25th anniversary, though, in 1971 my mother did get a new engagement and wedding ring set though she really never seemed to mind the original setting either.  It was more of a humorous story that was told over the years to friends who would always marvel at the recycled photo and ring.

But there is more to this story.  My parents were to be married in my mother's home town of St. Joseph.  A few days prior to the wedding my father arrived in St. Joe with his new acquisition which was a used car that he had just purchased in Detroit.  He was most proud of this car and it would be their honeymoon transportation to Niagara Falls.

On June 15th, the day of the wedding, my father decided to move the car from my mother's house because he was sure his brother and other male friends were going to be playing a prank on him with his car.  Not knowing the area of St. Joe he simply drove his car a few blocks from my mother's home and parked it in front of a house.  The wedding took place, the guests moved to the reception hall and the day was perfect.  After the reception my father walked back to pick up his car so he could go and pick up his new bride so they could start on their honeymoon.  But when he got to the place where he had parked the car, the car was GONE.

Thinking for sure that his brother, cousins, friends and/or my mother's three brothers had moved the car as a joke, he simply walked around the downtown area and happened upon his car which was parked in a parking lot of what he assumed to be a business of some sort.  He got in the car and proceeded back to pick up my mother at the wedding hall so he could drive her back to her home so she could change out of her wedding gown.  They had just pulled up in front of my mother's home when suddenly the police came up behind him, told him he was driving a stolen car, and despite protests that my father was the owner of the car, he was made to drive back to the police station.

My mother, so sure now that HER brothers had played some prank was so angry that she marched back to the reception hall where the party was still going on and confronted her brothers, cousins, brother-in-law and all professed innocence in the matter.

Back to the police station they all went where my father was being held as being in possession of a stolen car.  Everyone attempted to convince the police that my father was the rightful owner of the car, some offered to stay in his place and my mother's uncle even offered to put his nearby hotel up as collateral if the newlyweds could leave.  They were told, though, that this was a state offense and that my father would have to stay in the police station until word came from Lansing, the state capital, as to the rightful ownership of the car.

What had happened was that my father had purchased the car in Detroit from a man going through a divorce.  The man's wife had not known about the sale of the car and she reported the car stolen.  When my father had moved his car on the day of the wedding and parked it a few blocks away, the owner of that home had noticed the car parked there all day and reported it to the St. Joseph police who ran a trace of the license plate which came up as having been stolen in Detroit.  The police towed the car to the parking lot of the police station and my father, not knowing the area, simply got in the car and drove it away.

After sitting in the police station until 4 in the morning, the word finally came from Lansing that my father was indeed the rightful owner and my parents were able to finally leave on their honeymoon.

The next day they did make the front page of the St. Joseph newspaper which made for a repeat of a good story over the next 50 years.  My father even carried a copy of the newspaper clipping in his wallet those 50 years, as a reminder of the events of his unique wedding day: 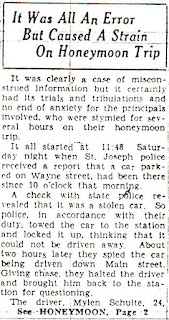 The next morning, none the worse for wear, they posed with the car in front of my mother's home as they prepared to leave on their honeymoon: 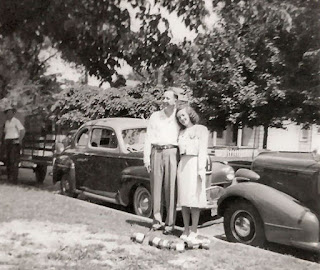 Fantastic! The story about the photo is so funny. Your parents must have a great sense of humor to be willing to share the story. But, then add the 'stolen' car story, including newspaper coverage... Wow! I imagine no one got tired of hearing that one, especially since so many family members were party to it all. Thanks for sharing!

Thanks, Barb. Yes, this was a story that my parents told many times over the years. It was a unique occurrence for a wedding that is for sure. My mother was often asked if she had second thoughts about who she was marrying after the car debacle and the fact that they got engaged after first meeting in person. She always remarked that she knew the family and never questioned the situation. Yes, those were the times.

Intent of this Blog

This is an ongoing history of my German and Polish ancestors, their lives and the factors that caused them to "cross the ocean" to create new lives in America!

The header (above) that appears on this blog was created after much deliberation as to how to adequately depict the focus and theme of "Two Sides of the Ocean".

There are two photos included from Germany including one showing the village of Schwarzenbach by Nürnberg, Bavaria, Germany where my Bauer family originated and a photo of the Evangelical Church of Groß Tuchen, Bütow, Pommern where my Kolberg and Kramp families originated.

All photos in this blog are created so that the reader may click on the photo to enlarge.