In the realm of genealogical "brick walls" I've been very fortunate.  Over my 45 years of genealogical research I have been able to eliminate many of the brick walls that had occurred.  When I began my research there were no personal computers, no Internet, certainly no Ancestry and most of my research was done sitting in Library genealogical rooms, writing letters to Germany and Poland, waiting months for answers and encountering many, many brick walls.

Now that we have all the amenities that make research quicker, with the addition of countless records put online, I have been able to solve many of my brick walls.

Some do remain, however, and a portion involve my maternal Kramp family.

Both of those dates I have been able to secure from church book records of Kathkow and Borntuchen now found online.  It is an amazing good fortune that a major portion of the church books for these areas have been indexed and are available for online searching.  But gaps occur and as luck would have it some of those gaps leave brick walls in my research:

1.  Marriage of Albert Kramp and Emilie Rott  I have not been able to ascertain the date and place of their marriage.  The clues that I have amassed include the date of birth of their first child (1857 in Borntuchen, Kreis Bütow).  Since this village was Emilie's birth place as well I can perhaps assume that their marriage took place in Borntuchen.  But there is no absolute proof of this. Marriage records for this time period are not available - YET (!)

In an interesting discovery for both Bertha and Pauline - they were married in Groß Tuchen, Kreis Bütow, Pommern, Germany in a double wedding on October 4, 1878.  Pauline married Heinrich Gersonde and Bertha married August Kolberg.  Later both families immigrated to the US, settling in Berrien County, Michigan.  I do have both marriage records as well.

Following the births of Pauline and Bertha, the remaining 8 children of Albert Kramp and Emilie Rott, all have birth/baptism records available for searching and I have been fortunate to find all of them.  Their third child, Robert Ernst Berthold Kramp, was born July 27, 1862 in Borntuchen and birth/baptism records were available for discovery which I was able to obtain.

4.  Birth/Baptism record of child #4 of above couple, Albert Carl Ludwig Kramp, was available in the church books of Borntuchen but for some reason showed only the year of birth as 1864.  His baptism was listed as Nr. 124 of Borntuchen, telling me from knowledge gained from reviewing in depth these church books that his birth was undoubtedly toward the end of the year.  The baptism record showed his godparents as well so it was nearly a complete record albeit without the actual month and day of birth.  Without his actual birth/baptism record, I am unable to ascertain the accurate date of birth.

Between the birth of Albert Carl Ludwig Kramp in late 1864 and late 1866, the family of Albert Ludwig Kramp and Emilie Rott relocated a short distance from Borntuchen to the village of Klein Tuchen where their remaining 6 children were born and, again, those church books are available for searching and I do have all their birth/baptism records which I received in the early 1980's by writing to the Priest in the village of Groß Tuchen where the church was located.

(These German villages were part of Pomerania during the time my ancestors lived there and the Evangelical Church was the church in which they worshipped.  After WWII when the Germans were expelled from this area it then became part of Poland and the Evangelical church books were transferred to the neighboring Catholic Church and the village was given the Polish name of Tuchomie, Poland.  It was from the wonderfully cooperative priest in Tuchomie that I received reams of valuable documents.  We had a correspondence that lasted nearly 10 years until he was relocated to a different church in Poland.  His cooperation was a blessing.)

The remaining children of Albert Ludwig Kramp and Emilie Rott, all born in Klein Tuchen and baptized in Groß Tuchen are:

In reality I have done exceedingly well with uncovering valuable documents on all the members of this family.

Albert Ludwig Kramp passed away in 1880 in Klein Tuchen.  Following his death, in stages over the next few years, his wife, Emilie Rott Kramp and her children all immigrated to the US and eventually settled in Berrien County, Michigan.  The only exception to this was their son, Albert Carl Ludwig Kramp, born in 1864 in Borntuchen, who remained in the area where he passed away in 1887. 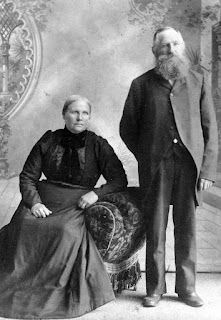 I continue to check availability of church books for the above 4 people hoping that the missing years will be discovered and put online.  Time will tell but they are my brick walls in any case.

I imagine the records you are looking at are in German? and in the fancy script? wow! Even with the aid of computers that is very difficult. I have many German ancestors but have not attempted using any German-language records.

Thanks, Barb, for your comment. Yes, the records are in German in the old script. I'm lucky because I have a cousin in Arizona who is fluent in German and he has helped me decipher many of the records. But after many years it becomes easier to read the name of the person in the record, parents names, etc and in the case of baptisms - the sponsors. It gets tricky where there is a paragraph of information and then I have to rely on my cousin. Those paragraphs off to the side sometimes have really useful information in them. There is also a Facebook German translation group I joined and the members are so kind with doing translations for others out of the goodness of their hearts. The group has some stringent rules for posting a request but I have been fortunate to have very kind translators helping me.

Intent of this Blog

This is an ongoing history of my German and Polish ancestors, their lives and the factors that caused them to "cross the ocean" to create new lives in America!

The header (above) that appears on this blog was created after much deliberation as to how to adequately depict the focus and theme of "Two Sides of the Ocean".

There are two photos included from Germany including one showing the village of Schwarzenbach by Nürnberg, Bavaria, Germany where my Bauer family originated and a photo of the Evangelical Church of Groß Tuchen, Bütow, Pommern where my Kolberg and Kramp families originated.

All photos in this blog are created so that the reader may click on the photo to enlarge.